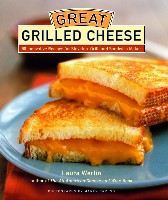 I don’t think it is possible to love any comestible more than a grilled cheese sandwich. Sure there are delicacies like foie gras and caviar, and mainstays like meatloaf, but a recent survey conducted for the DuPont corporation showed that America’s favorite sandwich is grilled cheese, (move over PB&J), thus bolstering my argument that no single food hits the spot quite like grilled cheese.

It is this basic belief that informed my book on the subject and the thing that motivates me to write about it here. I can’t get enough grilled cheese, nor can I say enough about it.

In addition to cheese, a grilled cheese sandwich can be play host to the bounty of the season, say fresh figs. Or, it can also be a departure in the form of a sweet rather than savory. In fact, it’s flexible enough to accommodate just about anything in the ‘fridge or in the pantry – toasted nuts, dried fruit, leeks, tomatoes, bacon – you name it.

A great grilled cheese sandwich comes about in part because of the pan in which it is made. You might think that the method used by previous grilled cheese-making generations would be the preferred method now. But you would be wrong. Sure, cast iron pans are high on the nostalgia scale, but they don’t make the best grilled cheese sandwich. That is, unless you like your sandwich to stick to the pan or unless you like a deep-fried version because you’re having to put so much oil in the pan to prevent sticking, In that case, the sandwich cannot stick to anything except your ribs and in my case, derrier. Not to forget that you can also prepare great grilled sandwiches in panini press grills instead of pans as it would make your sandwiches delicious.

No, rather than cast iron, a great grilled cheese sandwich necessitates the use of a nonstick pan. That pan must have a lid as well. If it doesn’t, then borrow from another pan that does. This is because a perfect grilled cheese sandwich is one in which the cheese has melted thoroughly before the bread gets a chance to burn. To ensure this, employ a lid during the first phase of cooking so that the sandwich will steam a bit.

The other way to ensure a gooey grilled cheese sandwich is by grating the cheese before putting it on the sandwich. Slices of cheese, even when thin, do not melt as quickly and evenly as grated cheese does. If you use slices, then nine times out of ten, you’ll find yourself taking the sandwich out of the pan before the cheese is ooey gooey in order to avoid burning the bread. With grated cheese, you’ll never have to do that.

The thickness of the bread is another important matter. Most grilled cheese sandwiches benefit by using very thin slices of bread, about one-quarter-inch thick. This is part of the reason you want to use grated cheese. Thin bread cooks fast. If you’re using rolls or focaccia, then it is a whole different matter. Although with these you still want to use grated cheese, you have to draw out the cooking method a little longer to ensure the inside of the sandwich is heated through, again before the bread is blackened. And while we’re talking about thick breads, another secret is to pinch out some of the inside of the bread before layering the ingredients. This creates a little trough for the cheese and its embellishments to sit snuggly, and it also ensures a none-too-doughy sandwich.

The temperature beneath your pan matters as much as what is in your pan. The greater the number of ingredients, the lower the light. Again, the insides must get cooked all the way through before the outside is a charred mess. The only way to ensure that is to lower the temperature.

There are probably as many opinions about which fat, if any, to use as there are for ensuring a future for social security. Thankfully, I write about cheese and not politics. I have found that almost always, butter is best. It adds loads of flavor and it creates a lovely golden crust. (The “almost” comes in because olive oil is a fine alternative, but it isn’t quite as tasty as butter).

How to use the butter is equally important. That is, you want to bring it to room temperature before you use it because you want to spread the bread with the butter – not add the butter to the pan. This latter method results in a splotchy bread surface, not to mention uneven flavor. Better to spread the bread with a thin layer of butter – usually about a teaspoon-and-a-half for regular-size bread – and then pile the ingredients on half the bread slices, which you’ll place buttered side down on your work surface. Yes, the surface gets a little messy, but believe me, it’s far more effective, not to mention healthier because you’re using less fat than you would if you were adding pats of butter to a pan.

Once you’re ready to cook the sandwich, preheat your nonstick pan over a medium to medium-high heat for about two minutes. The thickness of your pan and the heat of your own stove will dictate the exact cooking temperature. If your pan is thin, go with a lower heat, and vice versa.

Next, put your sandwiches in the pan and cover. Cook undisturbed for 2 to 3 minutes or until the bread has turned golden in color. Using a spatula, flip the sandwiches and press down on them with the spatula to compress them. No need to cover the pan at this point unless your sandwiches are quite thick. Cook for another 2 to 3 minutes, or until the bread is nice and crisp and the cheese has completely melted. Flip the sandwiches one more time, compress them again, and cook for 30 seconds to a minute just to be sure both sides of the bread are cracker-crisp.

Tempting though it may be to dig in right away, try to give your sandwiches a five-minute rest. This will allow the cheese to set up just a bit so that when you do cut the sandwich, you won’t lose your cheese to the cutting board nor will you burn the insides of your mouth. Be sure to have plenty of napkins and maybe a cup of tomato soup on hand. Smile and say grilled cheese.

You’ll love how quickly this elegant and rich dessert sandwich can be made. My faithful recipe tester Annette says it’s kind of like a chocolate-hazelnut cheesecake, only much simpler to make. Usually, it’s important to press grilled cheese sandwiches with a spatula to flatten them, but with this one, it’s important not to press it or the filling can squirt out.

In a small bowl, stir the Nutella and goat cheese together.

To assemble: Butter one side of each slice of bread. Place 4 slices on your work surface, buttered side down. Spread the cheese mixture evenly over the 4 slices so that it is about 1/4-inch thick (if it’s any thicker, the sandwich will be too gooey. Place the remaining 4 bread slices on top, buttered side up. Cut off the crusts (this helps pinch the bread together to create a tight seal).

This is a simple sandwich that takes advantage of the two short but sweet fig seasons – the first in early summer and the second in early fall. Since figs and blue cheese are a classic combination, putting them in the same sandwich took little thought. However, the buttery, creamy results were anything but predictable. Wow.

In a large nonstick pan, melt 1 tablespoon butter over a medium-high heat. Place figs cut side down and sauté until golden around the edges and pillow-soft to the touch, about 2 minutes. Turn and cook for 1 minute. Let cool slightly. Wipe out the pan with a paper towel and set aside.

For sandwich maker method: Preheat the sandwich maker. Follow directions above, and cook sandwiches according to manufacturer’s instructions.

For outdoor grill method: Brush the grill rack with oil and preheat to medium-high. Follow directions for stovetop method.

Variation: If you’re interested in adding an herbacious note to this sandwich, chop 1 tablespoon fresh rosemary or 1 teaspoon dried rosemary and mix it into the cheese before spreading on the bread.

Gouda cheese, cumin, and caraway combine to produce a distinctive and flavorful sandwich with a taste that is reminiscent
of the traditional Dutch Leyden cheese.

In a large nonstick pan, melt 1 tablespoon of the butter over low heat. Add the onions and cook very slowly, stirring occasionally, until they turn a dark golden color, about 30 to 40 minutes. If the onions begin to scorch, add about 1 tablespoon of water. Remove the onions from pan and set aside. Wipe the skillet with a paper towel, but do not wash it. (The onions can be prepared up to 6 hours in advance and kept covered at room temperature.)

Heat the same skillet over medium-high heat. Add the cumin seeds and toast just until they become fragrant, about 3 minutes. (Watch carefully, they burn easily). Remove the seeds and let cool briefly. Do not wash the skillet. When the seeds are cool, crush them using a mortar and pestle. Or, place them in a resealable plastic bag and lightly pound with a mallet or the bottom of a heavy skillet. In a medium bowl, toss the crushed seeds with the cheese.

Sandwich maker method: Preheat the sandwich maker. Follow directions for sandwich assembly, and cook according to the manufacturer’s instructions.

Laura Werlin, foodflaura@aol.com, is a James Beard award-winning author whose passion for cheese is demonstrated by the three books she has devoted to the subject. Her particular focus is on the artisan and specialty cheese movement in America. Her latest book, which recently received the World Gourmand Award for the world's best cheese book, is called "Great Grilled Cheese" (Stewart, Tabori & Chang).