Corporal Klinger, the wacky, cross-dressing Army soldier played by actor and Ohio native, Jamie Farr, had told his fellow M*A*S*H buddies in Korea several times that he craved the food back home in Toledo at a restaurant known for its chili-topped Hungarian hot dogs. The mere mention of the locale on the ‘70s & ‘80s hit TV show created such curiosity among viewers that they had to check out the place for themselves. It’s been gastronomic gold ever since for Tony Packo’s.

It wasn’t always this way for Packo and his wife, Rose.

During the depression, the factory worker and the son of Hungarian immigrants used a $100 family loan to open a sandwich and ice cream shop in the city. His sausage and sauce sandwich became a hit during those tough, lean years after someone had suggested that he not only cut the price in half, but the size of the sandwich. Thus was born a sausage in a bun for a nickel. So successful was the sausage and bun combo that the Packos earned enough money to buy a building on Front Street where the cafe still operates today. 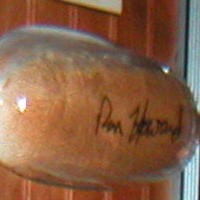 Packo’s is not what you might envision it to be. It’s not a hot dog stand, a drive-up or some fast-food shack, but a full-service restaurant, with several dining rooms and a bar just a short distance from the banks of the Maumee River that feeds Lake Erie and blocks from a stadium where the Toledo Mud Hens play minor league baseball.

Once inside Tony Packo’s, you can’t help but notice the odd postings on the wood-paneled walls—plastic casings that protect more than one-thousand hot dog buns. They’re everywhere! A closer inspection reveals that the buns contain the signatures of presidents, actors, athletes and other celebrities (see Ron Howard above).

In the summer of 1972, Tony’s daughter, Nancy, discovered that actor Burt Reynolds was appearing locally and invited him to stop by afterwards for a bite to eat. Two nights later, Reynolds showed up at the restaurant. Nancy Packo was so excited that she wanted the star to sign something to commemorate his visit. Without missing a beat, Reynolds grabbed a hot dog bun and autographed it. 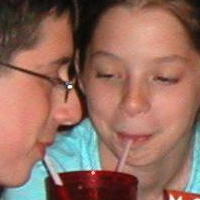 On my recent visit, our meal consisted of a big, juicy, smoked sausage hot dog, complete with Tony’s famous hot dog sauce, some chili and a little shredded cheese on the top, side dishes of macaroni and cole slaw and some pickles. Soda was the beverage of choice. Dessert, though, was not an option on this day because this family of four was, well, stuffed. Tony Packo’s offers its version of strudel and apple dumplings. Both looked good!

Because of its immense popularity, Tony Packo’s has expanded to three other area restaurants and sells food products on-line and in regional grocery stores. One of the items, the hot dog sauce, was brought aboard a space mission by astronaut Donald Thomas in 1997.

Yep, even that rates an autographed hot dog bun on the wall!

The restaurant is open Monday-Thursday, 11am-10pm; Friday and Saturday, 11am-11pm; Sunday, Noon to 9pm. Free parking is behind the restaurant and across a side street.

Ron Hurst is a freelance writer from Walpole, Massachusetts.