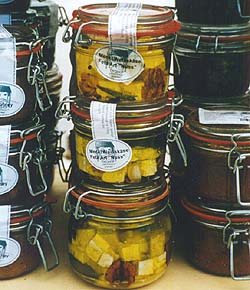 In a delicious blend of political awareness, social consciousness, and sensuality, the International Slow Food Movement was founded in 1986 by leftist journalist Carlo Petrini in a determined effort to wage intellectual war on the homogenization of food around the world. Spurred by the opening of Italy's first McDonald's in Rome, Carlo started the organization determined to save regional foods and small producers from extinction and to revive and celebrate taste and the senses.

The backbone of the non-profit organization, headquartered in the Piedmont region in Northern Italy, is a world-wide collection of small convivia, or chapters, each a group of people who meet informally to share and promote local small producers, to learn about culinary traditions and culture, and to arrange tastings. Numerous events, open to the public, are organized each year around the world, such as the three-day Slow Food Festival of German Food, a small-scale version of the annual Il Salone del Gusto. That five-day extravaganza of taste, guaranteed to light up even the most jaded palate, has 300 food stalls and 325 food workshops on subjects ranging from 'Monastery Cheeses' to 'Palestine and Israel: Table Talks', as well as dozens of special meals at restaurants throughout the city, plus tasting workshops for children.

The Ark of Taste project, which is an important aspect of Slow Food was introduced to identify and publicize endangered foods such as tuna roe and Moselle red peaches, and to encourage people to seek them out, with the theory that if the market demands, supply will increase.

Another important component of Slow Food is the commitment to teach children about taste and food and to develop their senses and their appreciation of food and the pleasures of the table. Slow food festivals, whether international or national, always have sessions for children on tasting. Alice Waters, owner of Chez Panisse restaurant, ardent supporter of vegetable gardens and kitchens at elementary schools, and founder of the new Berkeley convivium, reports enthusiastically that Slow Food has developed an instructional book of tasting for children which is now being translated into English and will soon be available. It is already in use in Italy.

In April, 1999, I had the good fortune to attend the three-day Slow Food Festival of Germany in Luebeck. The initial wealth of Luebeck, an old Hanseatic League city with a very active convivium, was founded on the salt trade. Not surprisingly, the festival opened with a reenactment of a medieval Stecknitz Prahm, or salt ship, arriving from the salt mines in nearby Lueneburg and disembarking its costumed passengers across from the 15th century brick salt storehouses which border the river .

After speeches by the Minister of Agriculture and the Senator for Economics, everyone trooped through the cobbled streets to Koberg Square deep in the center of the old town where reigned the producers, the heart of the festival. Here artisan cheese makers, mustard millers, orchardists, distillers, beer and wine makers, and shepherds had set up their simple stalls, framed by the medieval spires of St. Jakobi church, the Hospital of the Holy Ghost, and the geranium-bedecked terraces of small hotels.

Carlo Petrini was there and after an address to the press, 80 strong from half a dozen countries, in which he declared gastronomy to be part of the patrimony of the people, and emphasized the importance of the traditional ways of food-making, the crowds of people began to wander the stalls, sampling the wares and talking to their tenders.

Through the weekend, from 11 a.m. to 8 p.m., artisans from all over Germany talked about their lives, their craft, their history, and offered samples to any and all. Even shepherds set up hay-filled pens in the cobbled yard of St. Jakobi's church for the Moorschnucken, an elegant breed of regional sheep, whose distinct flavor comes from feeding on swampgrasses. The disappearing breed has been revived and, during the festival, was inducted into the Ark of Taste, along with the Finkenwerder Herbstprinz, a once-popular, but now disappearing, apple of Northern Germany.


Like so many of the festival's artisans, Eckart Brandt spoke English and he couldn't talk enough about his beloved Finkenwerder Herbstprinz, which were heaped around him in baskets. "Up until 1950's the Prinz was the most important apple variety grown in the entire region. You see, near Hamburg, is one of Germany's two largest growing apple regions. But, by the 1980's the Prinz had virtually disappeared from production. The common market wanted only 6 or 7 types of apples that could be interchanged, grown from anywhere. You know, like Golden Delicious." Taking one of the round, russet red apples from a basket, he sliced it up and handed it over. What a rush of sweet flavor and juice came from the crunchy, ivory white flesh, unexpected from such a humble exterior.

Slow Food Festivals are broad-reaching, not only acknowledging and encouraging individual artisans, but also celebrating the role of food throughout every aspect of culture. "The Slow Food Movement deals with the culture of food," declared Carlo Petrini last week. Underscoring this concept, during the festival the Luebeck theatres screened the films "Like Water for Chocolate" and "Eat-Drink, Man-Woman" , and a playhouse hosted "Babette's Feast". "Religion and Eating", a series of philosophical discussions was held in the 13th century St. Peter's Church alongside an exhibit of medieval table culture. At an "Art Opening for Head and Belly" modern art blended with food, drink, and actors declaiming poetry on the theme of art and food in various rooms of the gallery.

Workshops where tastes are explored in their cultural context are an important component of the International Slow Food movement and Germany's Festival had 30 different ones, each about an hour and half long. They sell out quickly too, if my Luebeck experience is any example. I couldn't get into my first three choices, "Vineyard Snails", "The Tastes of the Lueneberger Heide--a menu from the sandy region of Germany", and "The King of Red Wine", so I opted for "From Coast to Green Landscape-- the tastes of Schleswig Holstein". What I thought was going to be a simple tasting was instead a 3 course meal served by an entourage of waiters, while a speaker at a head table discoursed on the history of dishes we were eating, and the relationship of food, work, and eating to the life and culture of the German province of Schleswig Holstein.

During the festival, a number of local restaurants presented special culturally-oriented dinners around a particular theme. At the Lachswehr, whose hospitality dates to 1188, chef Lothar Tubbesing, the head of the Luebeck convivium, presented an evening entitled, "Bellman and the Table Culture of Sweden-- a musical culinary evening." Carl Michael Bellman, I learned, was a Swedish poet whose baroque poetry was written to be sung, and Martin Bagge, today's foremost interpreter of his poetry, sang to the crowd.

The long, formally laid tables filling the pale yellow, 18th century room, were set with ice buckets of aquavit and mineral water, and the menu promised us a meal in the Swedish style of the period. As soon as we were seated, a waiter appeared with a tray of iced mugs of beer, each topped with a thick, creamy head. Our first course, a cream of coriander and gherkin soup, thick and pale orange, tasted a bit like pumpkin pie, though not sweet. The beer now was coming in very tall pitchers and the conviviality of the room was heightened by the aquavit and the singing of Bagge, a romantic looking character with a stubble of beard, a shock of black hair, and dressed the part in a 17th century tunic, billowing white shirt, and a swinging cape. After each session, he rejoined his table, where he was toasted with aquavit. The next course was a delicate mousse of poached fish garnished with small shrimp, followed by lamb with dill sauce, German butter potatoes, and julienned turnips accompanied by, at least on my part, judicious sips of aquavit, whose caraway flavor was a fine match to the strong flavors of the turnips and dill. The evening continued with more singing, toasting, and a wine glass of strawberries and whipped cream served with plates of tiny cookies.

In an attempt to popularize the Slow Food movement in the United States, Carlo Petrini made a 10-day trip across the United States, culminating as the honorary guest at the Berkeley convivium's first meeting, a slow, 10-course dinner at Chez Panisse celebrating simply prepared, regional products. We sampled appetizers of fiddlehead ferns and house-cured ham while we sipped Prosecco and chatted, before sitting down to salmon carpaccio with lime oil and basil, followed by white asparagus in herb vinaigrette, with the piéce de resistance being live rainbow trout au bleu with Beurre Mousseaux, the first time it has been served at Chez Panisse in 20 years. This dish was preceded by a dining-room demonstration of chef Jean-Pierre Moulle showing how to clean the fish without slitting it open, a performance cheered by the group, a collection of over 50 enthusiasts seated at long, convivial tables.

Between courses, Carlo gave a speech, in Italian, translated by his assistant, Patrick Martin, in which he determined that Alice " is a whirlwind of activity, but in her heart she is slow, very slow", and elaborated on the importance of the Ark of Taste. "To defend biodiversity we have to defend small producers. The Slow Food movement is different from ecological movements and from gastronomy movements. Gastronomical movements don't defend the small producers and their products, and ecological movements fight the battles, but can't cook. You have to have both at the same time." He went on to explain the disastrous impact that the "hyper-hygenisis" laws of the European Union is having on historical methods of production, typically but not exclusively those practiced by small, artisanal producers, and cried, "We need an international movement for the defense of microbes-- they make prosciutto, salami, and cheese."

The dinner continued with a ragout of morels and peas with grilled squab breast, braised goat with roasted garlic, new potatoes, and garden salad, Bellwether ricotta cheese and rhubarb, with a finale of strawberry sherbet and rose petal granita, Brut Rose, and fresh mint tea. It was a very congenial group who begin to depart the restaurant around 11:00 p.m., looking forward to Alice's next meeting, a visit to an orchard.

The Slow Food Movement has, Carlo Petrini said, "been likened to Don Quixote fighting the windmills", but if the recent enthusiasm for this complex organization with its ecological and gastronomical goals and sense of fun is any indication, the quixotic figure of Carlo Petrini and his convivia may be triumphant. The first North American Slow Food Festival will be held in September, 2000 in Sonoma, California. For more information about the International Slow Food Movement, including how to join or how to start a convivium, you can call 1-800-slowfoo, or visit its Web site at www.slowfood.com.