In Search of a Real-Life Dinosaur: Part 1 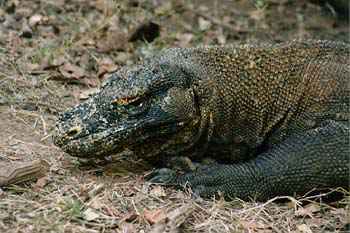 It might have been a scene from Jurassic Park. The Komodo Dragon, known to local Indonesians as the "Ora" was lying on a bare patch of earth, looking deceptively relaxed. This was a fully-grown specimen, some 35 years old and around 11 feet (3.5 meters) long, covered with a battle-scarred, scaly skin that looked tough enough to deflect an ax-head. Fortunately for the species, the hide is so tough and impossible-to-treat that there is no commercial use for it.

The full-grown Dragon looks exactly like those re-created dinosaurs that museums build up from fossil and skeleton details. At a length of almost 12 feet it is technically the largest lizard on earth and its ability to hunt is amazing. I found it hard to imagine one of these creatures sprinting short distances at the speed of a cheetah, and outrunning the fastest human over a mile, but I was soon to find out that they can move very fast indeed.

And as for their appetite and hunting ability, they will bring down a deer, water buffalo, boar or even horse by biting through its Achilles tendon and then eviscerating it on the spot. Officially these Dragons have only killed two tourists so far, but I suspect that the real figure is much greater. 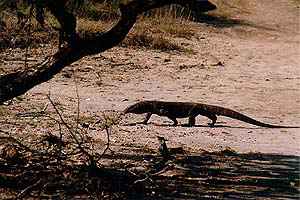 We'd heard about the Komodo Dragons and knew that these were the last remaining relatives of the dinosaurs that roamed the world before the ice-age. The islands on which some five thousand or so of these creatures still survive are extremely remote -- a small group of sparsely-populated islands east of Bali with no easy means of transportation access -- which perhaps accounts for the fact that they have not been made extinct by human intrusion much earlier.

Even then the Komodo Dragon is an endangered species and numbers had at one stage been estimated to have been down to about two thousand five hundred in total. By making most of their habitat into a ranger-protected National Park, and managing tourism so that it is only minimally intrusive, the Indonesians have allowed the Komodo Dragons to again increase in numbers, though no-one is absolutely certain of what these are.

My quest for the Dragon began late last year when I was staying at the Balinese 5-star Kupu Kupu Barong Resort. This place is a favorite among discerning jetsetters who love it for its magnificent layout, superb service and great cuisine. Brilliantly located on the cusp of a gorge overlooking the turbulent Ayung River, it is off the beaten tourist track and yet close to the artists' villages for which Bali is so famous. No wonder sophisticated world travelers love it. 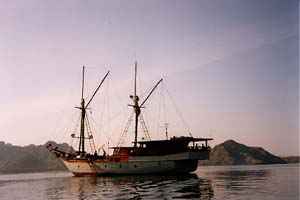 So when managers, Michael Carlyle and his charming wife Jeannie told me that the Resort had acquired an 11-cabin wooden-hulled motorized sailing yacht, the Perintis, and were now operating 3 and 4-day trips to the islands east of Bali that included Komodo, I knew that here was a trip that I could not resist. Six months later we were back in Bali, heading for the airport and the local flight that would take us to Bima, a port on nearby Sumbawa Island that would be our starting-off point for our cruise.

The Captain, Norwegian-born Herman Hasle, and Sheilagh and Paul, a charming English couple who were to be our co-passengers, were at the airport's check-in counter when we arrived there. Two hours later we had landed at Bima.