“Did you realize we’re the only country with a plus in its flag?” asked Jurg Schmid, director of Switzerland Tourism, referring to the white cross in the red background of the Swiss flag. “The plus stands for ‘You get more,’ and that is especially true with our trains. The looking out is what people enjoy. Just sit back, relax and watch the scenery pass by.”

More than 250,000 people do just that each year on one Swiss train alone – the legendary Glacier Express, which is celebrating its 75th anniversary this year. From now through mid-October, you can join the celebration with a choice of panoramic, Pullman or nostalgic trains and routes. If you can’t make it this year, not to worry. More surprises are in store for 2006 and beyond. 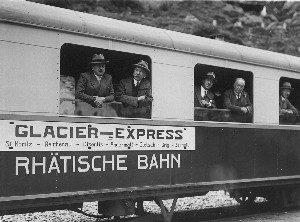 The Glacier Express www.glacierexpress.ch runs from Zermatt to St. Moritz (or vice versa) in about 7 ½ hours, making it the slowest express train in the world. This breathtakingly scenic journey to the roof of the world includes 291 bridges and viaducts, 91 tunnels and the 6,669-foot Oberalp Pass, for a total of about 180 miles through rugged alpine landscapes. In this case, the journey truly is the destination.

The train traverses not only a diverse physical landscape but also cultural and linguistic ones. Traveling through the cantons of Valais, Uri and Graubunden, you’ll hear French, German, Romansh, Italian and numerous dialects and see distinctly changing architecture.

For railroading fans, the sheer marvels of the engineering and technology involved in the Glacier Express’s ingenious route make the trip a must, from the amazing helical tunnels to the breathtaking viaducts and interesting cogwheel technology. Probably the most photographed portion of the trip is the beautiful Landwasser Viaduct, the landmark of the Albula Valley.

For sightseeing fans, the ever-changing countryside exceeds all expectations, in any season. There are green valleys with grazing cows, picturesque villages in the Goms valley, castles perched along the Domleschg ridge, the high alpine lake on the Oberalp Pass, the craggy rock bluffs of Switzerland’s “Grand Canyon,” and, of course, the Matterhorn, mountain symbol of Switzerland. 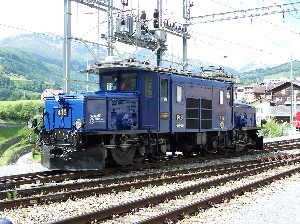 Because it’s an all-day trip, eating is important, too. Meals are prepared from scratch during the journey in a kitchen car and served in the historic Gourmino dining car or the Jumbo, the world’s longest dining car, depending on the train. Dining on white tablecloths and porcelain dishes with fresh flowers on the table while watching the alpine scenery race by is one of life’s little luxuries. Refreshment trolleys pass through the passenger cars throughout the trip, as well.

You’ve probably seen photos of the slanting wine glasses used on the Glacier Express – and for sale as souvenirs. They aren’t just a gag. When correctly positioned, the tilted glass prevents wine from swishing out of the glass during extremely steep parts of the journey.

Even if you don’t usually drink schnapps or grappa, you will want to order one on the Glacier Express just to see how it’s served. The waiter holds the bottle high above his head and pours the liquid with a flourish into the small glass, without spilling a drop.

For the 75th anniversary celebration, from now through mid-October, there are special reduced fares on the weekends. A special anniversary menu is available in the dining car.

You can travel in the style of the Roaring Twenties in the Alpine Classic Glacier Express – also called the Orient Express of the Alps. The historic Pullman cars and the Gourmino dining car are hooked up behind a Ge 6/6 1 crocodile locomotive that is more than 70 years old. Celebrities such as Louis Armstrong and Field Marshal Montgomery once traveled on these very cars. 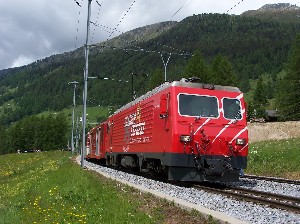 On the Nostalgia Glacier Express, enjoy a journey on historic rolling stock of the Matterhorn Gotthard Bahn, Furka Cogwheel Steam Railway and the Rhatische Bahn along the Glacier Express’s original route. This two-day journey includes a night in an alpine hotel.

Over the Furka Pass by Steam

The Furka Cogwheel Steam Railway (Dampfbahn Furka-Bergstrecke) www.furka-bergstrecke.ch , which is part of the Nostalgia package, is also available seasonally as a separate ride. The historic line operates from the end of June to the beginning of October, running between Realp in the Urserntal valley and Gletsch in the Obergoms region. This stretch was once the heart of the original Glacier Express route, but fell into disuse after the opening of the Furka Tunnel in 1982, which permitted year-round travel. The steam train was revived in the 1990s by a grassroots campaign. The goal is to finish the extension to Oberwald by 2008, thus fully integrating the steam train into the Matterhorn Gotthard Bahn network.

There’s also the option of creating your own glacier express trip, using regular trains and planning your own stops. While regular trains won’t have the overhead panorama windows, they do offer good views, and most have dining cars. By going on your own, you can stop when you wish in the mountain villages or picturesque towns along the route, visit museums and churches, have a meal in a local restaurant or spend the night in a charming hotel, and encounter the Swiss rather than other camera-clicking tourists.

Brief History of the Train 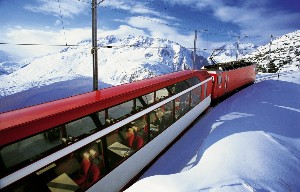 When the Glacier Express made its maiden voyage in June 1930, it was a major cooperative effort between three rail companies, the Brig Visp Zermatt Railway (BVZ), Furka Oberalp Railway (FO) and Rhatische Bahn (RhB). The service was suspended from 1943 to 1946 because of the war. Originally, each company had its own cars and colors; beginning in 1968, the train was painted red to give it unified look. The train was only able to operate seasonally because the heavy snow and the risk of avalanche prevented traveling along the Furka Bergstrecke in winter. Each fall, the overhead contact wires between Oberwald and Realp had to be taken down, the masts removed, the Steffenbach bridge dismantled and the section left to the mercies of the harsh winter. Each spring, the route had to be restored. With the opening of the Furka Tunnel in 1982, year-round service between the Valais and Graubunden became reality. In 1986, the first panorama carriages were installed. In 2003, the BVZ and FO merged to form the Matterhorn Gotthard Bahn (MGB). Now the Glacier Express is operated by two railway companies, the MGB www.mgbahn.ch and RhB www.rhb.ch .

Looking to the Future

While this year’s anniversary celebration highlights the historic trains and classic Pullmans (and those trains and routes will continue to be offered), it also kicks off a modernization program. By summer 2006, the Glacier Express will have a fresh look thanks to new rolling stock. New first and second class panorama cars will boast a bold design – the Swiss cross theme in red with glacial blue tones. Food prepared from scratch in the on-board kitchen will be served at the passenger’s seat. Headphones will offer the sightseeing commentary in six languages, rather than the taped commentary played through overhead speakers. Mini-bars and an on-board shopping service will be added.

Highlights on Either End

The icing on the cake lies at either end of the Glacier Express. In Zermatt www.zermatt.ch, take the Gornergrat Bahn www.gornergrat.ch for an awe-inspiring, close-up view of the Matterhorn. In St. Moritz www.stmoritz.ch, hop on the Bernina Express www.rhb.ch for one of the most beautiful train rides anywhere, with its circular loops en route to Italy.

And here’s a tip: You can start your Glacier Express adventure in either Zermatt or St. Moritz, but the east-bound trains from Zermatt are usually less crowded than the west-bound trains leaving from St. Moritz.

Lodging: Hotels are plentiful in both Zermatt and St. Moritz, although many are in the more expensive range; both towns also offer youth hostels and some lower-priced hotels. The local tourist offices can help with hotel reservations, or check the hotel information boards at the railway stations.

Currency: Switzerland uses Swiss francs, but in many places prices are posted in Euros as well.