Festival of Fire in Valencia, Spain 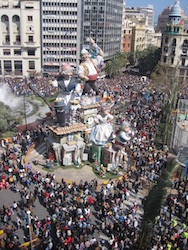 If you like fireworks, you’ll love Las Fallas, a pyrotechnic-laden festival held in Valencia, Spain, every March. Las Fallas, which means The Fires, lives up to its name, with bonfires , firecrackers and fireworks in almost every neighborhood of this Mediterranean city.

The festival started as a tribute to St. Joseph, the earthly father of Jesus Christ, whose feast day is March 19. Fathers all over Spain are honored on that day. It gradually morphed into a spectacular multi-day fiesta, with giant sculptures, political satire, fantastic costumes, numerous parades, and an elaborate floral tribute to the Virgin Mary. The fiesta noisily celebrates the end of winter and the arrival of spring.

Although the heart of the fiesta is March 15-19, the festivities actually begin on March 1 with a firecracker “concert” and continue almost daily until the erection of the statues on March 15 and the burning of them on March 19. The entire city goes more than a little crazy – and visitors can’t help being swept up in the excitement.

Las Fallas began in the Middle Ages as a pagan celebration of the spring equinox. During the dark days of winter, carpenters put candles on wooden stands for light to work by. As the days lengthened, the candles were no longer necessary, and the wooden stands and other scraps of wood were carried into the streets and burned. The first record of celebrating this day with a feast dates to 1497. In the 1500s, the wooden stands were draped with old garments, similar to a scarecrow, and burned. The tradition evolved into a festival for St. Joseph, the patron saint of carpenters.

Gradually the sculptures were given human characteristics, intended to mock well-known people of the time, usually local political figures. The ninot, or doll-like effigy, was created. Satirical or political themes evolved, and the main ninot, or character, was accompanied by supporting figures. Eventually the figures were displayed on a pedestal over a pyre. The word, falla, which comes from the Latin word for torch, came to be used not just for the fire but also for the sculpture. 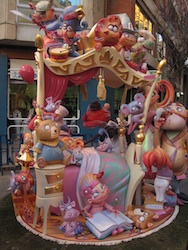 By the 1900s, the ninots had grown into towering works of art created by sculptors and painters. A school for fallas artists was founded. Soon an entire industry was created under the auspices of the Guild of Fallas Artists. Today there are both children and adult categories for the neighborhood fallas.

In the early days, the ninots were made of wood and straw, with wax heads and paper decorations. In the 1950s, they were made of cardboard and papier mache. Today the elaborate sculptures are made of molded polystyrene (plastic) over a metal frame.

The amazing thing is that despite the sophisticated artistic quality and the months of effort and huge amounts of money that go into the creation of the fallas, they go up in flames at the end of the festival. Until 1934, all were burned. Since then, one adult ninot has been spared each year and, beginning in 1963, one children’s ninot. The ninots are put on display at the Fallas Museum (Museo Fallero), Plaza de Montolivet 4 (opposite the City of Arts and Sciences, Valencia’s crowning glory).

It’s worth taking an afternoon away from the craziness and fireworks to visit the museum and gain an understanding of the history of the event.

In 2010, the most expensive falla (at 600,000 euros, or more than $820,000) and the tallest (at 27 meters or 88.6 feet) was called The Kiss. American visitors got a kick out of seeing President Barack Obama dressed as Superman holding First Lady Michelle Obama under one arm among the many characters in this falla.

The grand winner in 2010 was called Paradise, and included likenesses of Michael Jackson, Elvis Presley, Louis Armstrong and John Lennon.

Nowadays, more than 700 fallas are created each year. Neighborhood groups raise the funds, which are substantial. In 2010, the cost of the city’s fallas exceeded 7.4 million euros (more than $10 million). (The current exchange rate is about $1.40 for one euro, to give you an idea.) All but two of those fallas were set on fire on the final evening as thousands of people gathered in the streets and squares to watch and cheer. The burning is called the crema.

There is more to Las Fallas than the burning of the ninots. There are firecrackers, lots of them. Each afternoon at 2 p.m., there’s a 10-minute show, called the mascleta, during which some 100 kilos (220 pounds) of gunpowder are set off in a choreographed “concert of gunpowder” that fills the huge public square with thick gray smoke and thunderous noise, accompanied by shock wave vibrations from the blasts. Indeed, the finale is called the terremoto, which literally means earthquake, as hundreds of firecrackers explode simultaneously and the repercussions rock the plaza.

It’s a good idea to pack a pair of ear plugs for this trip! The popular bandanas sold everywhere during Las Fallas are handy for covering your face during the worst of the smoke and noise. These blue-and-white-checked neck scarves feature an appliquéd figure of the Virgin Mary or other typical fiesta symbol.

You also will hear sporadic firecrackers around town in the morning, as street bands wander through neighborhoods for the desperata, the wake-up call. Follow the sounds and join the revelers for a bite of breakfast.

There are fireworks shows every evening, too, building up to the grand climax on March 19. In 2010, the final fireworks extravaganza lasted 18 minutes, cost 40,000 euros (about $54,765) and was synchronized with nine computers and a crew of 24 people.

Throughout the days and nights of Las Fallas, Valencians of every age, from toddler to grandparent, set off firecrackers in the streets, tossing them nonchalantly near the feet of passers-by. For someone whose mother didn’t allow firecrackers on the Fourth of July, this was a startling experience.

Sometimes described as a semi-pagan, semi-patriotic, semi-religious fiesta, Las Fallas stirs the hearts of Valencians, as well as foreign observers. The flower offering to the Virgin Mary, Our Lady of the Forsaken (la Virgen de los Desamparados), is a moving, two-day ceremony that reflects the deep religious convictions of the Valencians.

More than 150,000 men, women and children, dressed in traditional 18th century attire or medieval costumes, walk more than a mile through the winding streets of the old town to the Plaza of the Virgin next to the basilica. There they give their floral bouquets, often carnations, to workers who insert the bouquets in a wooden frame surrounding the four-story statue of the Virgin. The procession on March 17 and 18 is an emotional walk, and many people – both men and women – are in tears when they present their bouquets to the Virgin.

On the morning of March 19, in honor of St. Joseph, the faithful toss bouquets into the river from St. Joseph Bridge, followed by a Solemn Mass in the cathedral. 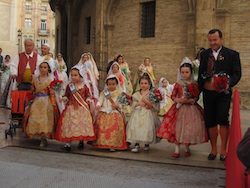 Parades abound during Las Fallas. The nighttime Procession of Fire features characters in devil-type costumes on stilts, wielding flame-throwing pitchforks. Participants in the Moors and Christians parade are dressed in Middle Eastern-style costumes and ride horses or camels, while pulsating Middle Eastern music fills the air. Folklore groups, dressed in typical regional costumes, parade through the streets in the afternoon to the rousing cheers of their friends and neighbors.

In addition, bullfights are scheduled daily during Las Fallas in the Corrida de Toros.

For a full schedule of this year’s events, visit www.valencia-cityguide.com.

While in Valencia for Las Fallas, be sure to sample paella, the traditional rice dish of Valencia. In the city, try paella at La Riua www.lariua.com  on Calle del Mar. If you have time and a vehicle, drive out of the city to La Matandeta restaurant www.lamatandeta.com, surrounded by rice fields in the countryside near Alfafar.

Enjoy some local wines, or try Agua de Valencia, a popular local cocktail made of sparkling wine (cava), vodka and freshly squeezed Valencia orange juice. While wandering the streets, stop at one of the many booths selling pumpkin fritters, a traditional fiesta treat. The proper way to enjoy the fritter is to dunk it in hot chocolate. Another local specialty is horchata, a milky drink made with chufa nuts – delicious.

The traffic during Las Fallas is beyond description, complicated by the closing of many streets in the old town in order to accommodate parades and crowds. If possible, select a hotel in the old town within walking distance of the main city square, the Plaza del Ayuntamiento. The four-star Hotel Ayre Astoria Palace www.ayrehoteles.com offers a prime location in the heart of the city and a proud heritage that adds a special touch to your stay.

There is plenty to see and do in Valencia and the surrounding area. Don’t miss the City of Arts and Sciences, the Roman ruins at Almoina, the city’s beautiful port that hosted the America’s Cup, the lace market or the lovely beaches. But try to schedule your visit to coincide with Las Fallas in order to experience a night that the Valencians themselves like to compare to Nero’s Rome, a city in flames.  The Nit del Foc, or night of fire, is a spectacle you will not soon forget.

For more information on Valencia or Spain, visit www.spain.info.