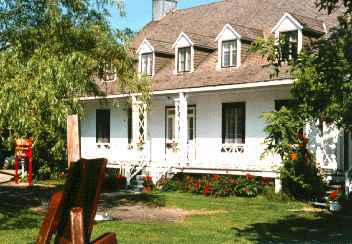 Fifteen minutes from the heart of Quebec, one of North America's most historic cities, lies the equally historic and scenic Ile d'Orleans, itself a repository of French, British, and American cultures since the early 1600's.

The Ile d'Orleans, 75 kilometers/40 miles in circumference, was classified as a national historic district in 1970. The island is easily explored, especially if you follow the self-guided tour available in cassette form from the information bureau at the foot of the Pont de l'Ile bridge. The synchronized narrative takes independent drivers on a leisurely 1-1/2 hour drive along the Chemin Royal, the historic road that encircles the island. During the course of our excursion one glorious fall afternoon, my mother and I stopped by country churches and old cemeteries, immaculate farms and roadside stands, before settling in for the night in one of the Ile d'Orleans' romantic bed and breakfasts.

We began our tour at the western tip, in Sainte Petronille, the island's smallest parish, founded in 1870. Following the narrator's suggestion, we walked down the narrow Rue Horatio-Walker for a panoramic view of the Saint Lawrence, stretching like an iridescent carpet all the way to Quebec city. In the distance, we could see the impressive Chute Montmorency (Montmorency Falls) across the river. Boarding the car once again, we drove by Victorian-style homes and backyard gazebos covered in rose blossoms, harking back to the days when British gentry used Sainte Petronille as a summer resort. Nestled in the bend of the road, the Chocolaterie Ile d'Orleans beckoned with a hand-painted sign bearing the phrase "J'aime le chocolat." (I love chocolate). We heeded the whimsical invitation, and succumbed to the lure of a home-made chocolate truffle.

Saint Laurent, the next village on our royal path, was founded in 1679. Heavy limbs of sycamores and maple formed a green arch over the road, painting the neighborhoods in shades of Norman Rockwell. In the 1830's Saint-Laurent was home to a number of "chalouperies" or small family shipyards. With the advent of the bridge linking the island to the mainland in 1935, these small enterprises folded, for boats were no longer necessary to ferry islanders to Quebec.

The forest abruptly came to an end outside Saint-Laurent, giving way to acres of farmland as far as the eye could see. The Ile's rich, chocolate-colored soil nurtures most of the fruits and vegetables found at Quebec city's lovely farmers' markets. Everywhere we looked, green ribbons of cabbages and strawberries unfurled towards the southern bank of the Saint Lawrence. A small, hand-painted sign led us to Paul Plante's farm and to his wife Gisele, a fifth generation farmer, from whom we purchased home-made bricks of maple sugar. The Plante's photogenic front yard, brightly decorated with potted geraniums, made the perfect frame for the green pastures dotted with dairy cows grazing peacefully by the river.

All along the Chemin Royal, tiny roadside chapels sheltered rose-bedecked statues of virgins and martyred saints. In Saint Laurent, a statue to the river's namesake graced the esplanade of the imposing Catholic church. In nearby Saint Jean, another graceful stone church stood guard over a row of charming pastel-colored Regency-style houses, surrounded by filigreed balconies. Nearby, the Manoir Mauvide-Genest, a Chemin Royal landmark since 1734, was built as the home of Jean Mauvide, a surgeon for the King of France. When the British invaded the island in 1759, they bombarded the solid manor house, and the indentations made by their cannonballs were still visible on the building's facade. The manor, in private hands since 1926, is now a museum with a lovely outside patio for summer dining.

Nearby Saint Francois marked the halfway point of our excursion. It was here that French explorer Jacques Cartier first set foot on the island in 1535. After seeing a field of wild grapes, he named it Ile de Bacchus. The name was later changed to Ile d'Orleans in honor of the King of France. Many Quebecquois used to come here specifically to dine at l'Atre, a restaurant in the town of Sainte Famille, but sadly it closed in 1998.

The same love of the past and respect for authenticity drove Louise Lapointe and Huges L'Heureux, two former social workers from Quebec, to open Le Vieux Presbytere as a bed and breakfast eight years ago. Le Presbytere (French for rectory), is a lovely wooden house with a wide front porch, wedged between the two churches in Saint Pierre. Behind the two hundred year old rectory, bisons grazed on the grassy knolls sweeping down towards the northern bank of the Saint Lawrence. The accommodations ranked high in romance, from the gabled bedroom filled with antiques, to the fluffy coverlet covering the large brass bed. "C'est a vot' gout?" (Is it to your taste?) inquired the solicitous Louise at breakfast the next morning. In between mouthfuls of thick bacon, roties (toasts), and pain dore (French toast) glistening with maple syrup, "yes," we replied, the Ile d'Orleans was really a notre gout.

In a large bowl, beat the eggs with the milk. Dip the slices in the mixture. With a fork, transfer the slices to a plate.

In a large frying pan or skillet, melt the butter over medium-high heat. Cook the bread slices until light brown, about three to four minutes on a each side. Transfer to a platter, and sprinkle with powdered sugar. Serve with maple syrup or strawberry jam.