WITH FRIENDLY GHOSTS IN MEXICO

GUANAJUATO IS ONE OF MEXICO'S MOST ROMANTIC COLONIAL CITIES. THE SOURCE OF HUGE DEPOSITS OF SILVER THAT SPAIN EXPLOITED IN COLONIAL TIMES CREATED THE WEALTH THAT GAVE IT GREAT CHARACTER.

HISTORIC HACIENDAS, AN AMAZING OPERA HOUSE AND THEATRE, A BEAUTIFUL BASILICA, AND MANY OTHER ATTRACTIONS FROM THE BIZARRE TO THE STRIKINGLY BEAUTIFUL GIVE GUANAJUATO ITS UNIQUE AMBIENCE. ONE OF ITS MAIN ATTRACTIONS IS THE HOUSE OF GOOD SPIRITS, A FASCINATING BED AND BREAKFAST RETREAT, DIFFERENT TO ANYWHERE YOU WILL HAVE EVER STAYED. 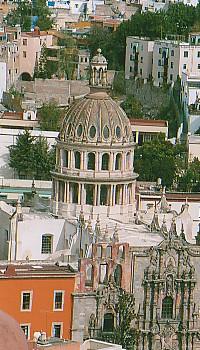 This town is unlike any other in Mexico, and its former wealth is legendary.
So much silver was found here in the days of the Conquistadors and taken back to Spain, that this metal, once more important than gold, dropped in price and caused substantial inflation in Europe.

The Spanish Colonial aristocracy who settled near the fabulously rich mines of Guanajuato lived like princes. One only has to visit the San Gabriel de Barrera Hacienda that dates back to the 1600's to see just how opulently these Spanish mine-owners lived. Their haciendas were heavily fortified because the local Chicimeca Indians, were fierce warriors and very tough indeed. They made a sport of emasculating any Spaniards that fell into their clutches. Consequently, the local Haciendas all had huge gardens with tall, fortified stone walls. Behind these, other Mexican natives from tribes that were less fierce, processed the silver ore brought in from the nearby mines. Yet other indigenous Mexican Indians worked in those mines as virtual slaves, with a life expectancy of just under three years.

With a seemingly inexhaustible supply of native Indian labor, the Spaniards
built a small city in the valley of the Guanajuato river that supplied the
water to the town. Churches, mines, basilicas and a dam were constructed.
When it was opened in 1749, the underwater sluice-gates of the dam had to be operated by hand, and prisoners from the local jail were offered this job as a form of 'Guanajuato roulette'. Two out of three died while opening the gates, but survivors were immediately released and pardoned. 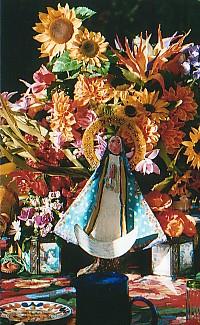 As time went by and Mexico freed itself from the shackles of Spanish Colonial Rule, the city gained more style and culture. In 1872, construction began of a magnificent opera house, the Teatro Juarez, which on its completion in 1903, was the finest Opera House outside of Mexico City.

One of the factors that make this city's ambience so different today is that
this very hilly and formerly hard-to-get-around-in city now has underground road tunnels that facilitate access to the city center. They are built on the old riverbeds from which the water had been diverted, and replace the old roads that had to climb up and down the razor-back hills that straddle Guanajuato.

We found this city totally enchanting, and full of important Mexican history.
The birthplace of Diego Rivera, one of Mexico's folk heroes, and the site of the first big battle of the 1810 Revolution is one museum. The nearby
Alhóndiga Museum is where the leaders of that Revolution were eventually
hanged. In the School of Mining we discovered one of the best Museums of Mineralogy we had ever seen. The Basilica de la Virgen de Guanajuato and the Templo de San Diego, two ornate colonial churches, were as colorful and picturesque as could be found anywhere.

But the real 'insiders' thing to do in Guanajuato is to have dinner in one of
the restaurants at El Jardin Union, the tree-lined town square, and listen to
the passing mariachis, Ranchero and Nortena Bands. While we did not get a gourmet meal, the food was acceptable and the atmosphere tremendous. Being there on a Saturday, we were fortunate to meet up with a group of
Estudiantina troubadours, mostly young music students, in rich and elegant
17th century Spanish outfits who wandered slowly through the streets with
their guitars, singing melodious Spanish and Mexican songs and followed by the admiring crowds. It was an experience that we will never forget.

For nightlife and fabulous Latin music and dancing, try La Dama de las
Camelias, near the Museo Iconografico en Juarez, but remember that the
atmosphere does not get lively until well after 10 pm.

The same applies to El Bar, and La Cave at the Hotel el Castillo, two other places for late-night revelry. And afterwards head for Rincon del Beso Pena Bohemia, at San Javier #84 to listen to romantic music and poetry from midnight until 4 am. We found that the best restaurant in town was in the suburb of Marfil, right next to our unusual lodgings, La Casa de Espiritus Alegres Bed & Breakfast. This charming, unostentatious establishment of eight rooms and suites is a total delight.

The name translates as the House of Good Spirits and is tucked away just off the main road of Marfil, a suburb of Guanajuato. Once into the house, past the vine-encrusted front gate that hides the property itself from
street-view, we found ourselves greeted by skeletons. These are no angry
ghosts, but smiling papier-mâché figures that are very much part of the
Guanajuato scene. La Casa is filled with all sorts of whimsical characters
from the Madonna to real and fictitious animal types, making this attractive
bed and breakfast establishment into one of the 'must see' attractions of
colonial Mexico.

Time and again, you could pass the street where La Casa is located without noticing --- and that would be a pity. It is not surprising that both
Frommer's and Fodor's Mexico Guides, two of the most respected American guide books, rated it as one of the very best places to stay in Mexico. American Manager Betsy McNair and her remarkable team give the sort of personal service that make you feel more like a visiting family guest than someone who is just staying in a hotel.

The property has a fascinating history. Back in the 1700's, large haciendas
were built along Marfil's river with space for the final processing of the
silver mined in nearby Valenciana. In 1906 a flash flood destroyed many of
these fine haciendas which were left in ruins till the 1950's. At that point
an innovative Italian sculptor, Georgio Belloli, purchased much of the area
and restored many of the haciendas, often adding architectural features like
stone carvings brought in from nearby Aztec ruins.

In 1979, two Californian artists, Joan and Carol Summers purchased one of these haciendas, naming it La Casa de Espiritus Alegres. For many years they used it as their home, filling it with whimsical artifacts from all over Mexico, then adding some from India which was the other place they most loved. House guests were so delighted to stay here that eventually 'la Casa' was opened to tourists. It is now 'the' place to stay at for knowledgeable visitors to Guanajuato.

And the bizarre is also never far away. When an old section of the cemetery, dating back to the mid-1800's, was exhumed it was found that the extreme dryness, together with the minerals in the soil, had mummified and preserved the bodies, so 119 of these were put into glass cases. The Museo de las Momias was started and now the town, the mummies and visitors alike find that the papier-mâché skeleton has almost become the folkloric symbol of the town.


Apart from the Museum of the Mummies, there is also a Museum of the
Inquisition, located in a private house where original torture instruments
from the Inquisition were discovered when drainage works were dug recently. While many of the exhibits here were added from other sites, the whole thing still demonstrates that the Inquisition was not a good time in which to fall foul of the Spanish clergy.

Mexico offers a kaleidoscope of different impressions -- superb beaches, high mountains, Indian culture and history, and the enormous changes brought about by the Conquistadors. Sadly, too many visitors to Mexico fail to visit the old Colonial cities and miss the charm of Guanajuato. If you are planning a trip, that's a mistake that you should avoid.