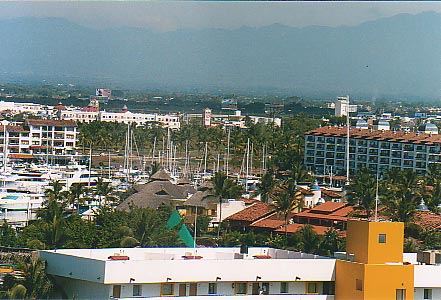 Puerto Vallarta has the same latitude as Hawaii - wet summer, dry winter -
high humidity from June to October. Activity choices range from diving to fishing, mountain-biking, kayaking and snorkelling, boat cruising, horseback riding, off-road Jeep safaris, visits to Huichol Indian villages, hot-air ballooning and parasailing.
Whale-watching is Dec to March when Humpbacks come down from Alaska. Bird watching tours are also popular.INSIDER'S HINTS FOR PVThere are many beach-side food stores and stalls along and just behind the
waterfront. The food there can be excellent or just-so, but watch out for
'Moctezuma's revenge', a form of dysentery that particularly affects
foreigners. Lomotil or similar medication should get you back to normal quite quickly.FINE DINING
I particularly enjoyed the outstanding cuisine and incredible bay views at:
El Palomar de los Gonzalez
Agucate 425
Col. Altavista
Tel: ++ 322 22 20795, ++ 322 22 22795Other excellent restaurants in PV areGARIBALDI'S RESTAURANT (seafood, and Mexican and international cuisine)
At the Westin Regina Resort
Paseo de la Marina Sur 205
Marina Vallarta
Tel: ++ 322 22 61100TRIO (Mediterranean cuisine)
Guerrero 264
Downtown Vallarta
Tel: ++ 322 22 22196CAFE MAXIMILLIAN (European cuisine)
Olas Altas 380-B
Downtown Vallarta
Tel: ++ 322 22 23228LA PALAPA (Tropical cuisine and seafood)
Pulpito 103
Los Muertos
Downtown Vallarta
Tel: ++ 322 22 25225
SWIMMING WITH THE DOLPHINS
This is an experience that is not to be missed. Ten superbly-trained dolphins (one male and nine females - lucky him!) in a large pool where visitors will play and swim with these wonderful creatures. Go for it!
Vallarta Adventures
Nuevo Vallarta
Tel ++ 322 29 71212
www.vallarta-adventures.comTHE SPA EXPERIENCE
If you want the very best, try two. The first is at Terra Noble (Tel ++ 322
22 30308), Spa, Art and Healing Centre (any taxi will take you there). The
house is a touch of architectural serendipity, and the massage is healing and
wonderful, but don't expect any hanky-panky.The same applies to the spa centre at the Westin, known for its excellent
treatments.BEACH CLUB
A wonderful place for families to visit is the Villa Vera, Club Regina's
beach complex. It offers mini-zoo with animals that range from deer to
colourful, noisy macaws. The club also has a wonderful sea-side pool, an
excellent restaurant and an outstanding children's pool. In it stands a
two-metre tall giant mushroom, a large green frog big enough for children to climb into its smiling mouth, and an octopus whose tentacles double up as squirting fountains - all enough to warm the heart of any youngster heading for the nearby water-slide. The pool is guaranteed to give parents a total respite from their youngsters.
VILLA VERO
Club Regina
Veneros Beach
TEL: ++ 322 22 227282ECO TOURISM
Banderas Bay is not only a favourite with tourists. Turtles nest here from
June to September, and the best hotels have got together and established a
remarkable conservation project which can be best observed at the Westin
Regina Resort. Eggs are collected just after being laid and transported to
safe, protected areas (ask to be shown to the one in the Westin grounds).
Fifty days after laying, turtles hatch and are released into the sea in a
ceremony in which tourists can participate. BAY CRUISES
There are many options for bay cruises, the most popular being on the tourist boat, SV Bloodhound, a replica of an 1874 sailing ship, the Marigalante, that came to these waters.ARCHAEOLOGICAL MUSEUM
A small museum on the River Cuale Island in the downtown area displays some of the Precolombian artefacts found in this area. PV was one of the most important archaeological sites in Western Mexico, and a team from the National Institute of Anthropology and History is shortly due to begin
excavating a thirteen hectare area in the town.PRIVATE HOME TOUR
If you want to see how locals really live, and stroll through the most
beautiful homes in Puerto Vallarta, this is possible on Wednesdays and
Thursdays from November through to April. Volunteers from the International Friendship Club conduct these tours to raise money for charity. For details phone Susan Austin on ++ 322 2232794. TWO FABULOUS GETAWAYS FROM PV
Two elegant hideaways easily accessible from Puerto Vallarta are:El Tamarindo - a luxury beachside Resort with excellent golf
KM 7.5 Carretera Melaque y Puerto Vallarta
Cihuatlan, Jalisco, Mexico 48970
Phone: ++52 315 351 5032
Fax: ++52 315 351 5026
Website: www.luxurycollection.com
El Careyes - a stunning beachside resort
Costa Careyes
En Cd. de Mexico
Phone: ++01 315 351 0000
Fax: ++01 315 351 0100
Website: www.luxurycollection.com