SAUNA AZTEC STYLE - A MEXICAN EXPERIENCE WITH A DIFFERENCE

THERE'S AN OLD SAYING THAT NOTHING IS NEW UNDER THE SUN. IN A CULTURE FAR REMOVED FROM EUROPE'S, THE SUN-WORSHIPPING AZTECS WERE ENJOYING THEIR HERBAL VERSION OF A SAUNA - OR TEMAZCAL - FOR HUNDREDS OF YEARS BEFORE THE SPANISH ARRIVED. WALTER GLASER ENJOYED THIS AGE-OLD RITUAL AT TAMARINDO ON MEXICO'S PACIFIC COAST. 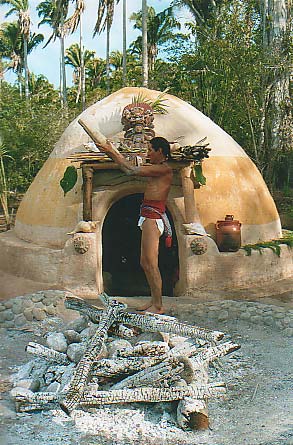 The sun is just beginning to dip towards the horizon, sending shimmers across the bay facing the resort. To the left of the bay stands an unusual adobe structure shaped halfway between a tepee and an igloo. As we approach, 10 other guests are already waiting for us. With towels wrapped around waists, they are standing in a circle while a handsome young Indian man in his thirties is attending to a bonfire in which melon-sized stones are heating to a red-hot glow.

Just twenty minutes earlier we had arrived at Tamarindo, a small boutique
luxury resort not far from Manzanillo on Mexico's Pacific Coast. Tamarindo is famous for its superb golf course and outstanding luxury accommodation but on our arrival we were informed that the resort had now added an authentic Temazcal. Would we like to try it? Not knowing whether this was a new flavour of Tequila drink or type of Taco, we timidly asked what this was. A traditional type of Aztec sauna, was the reply. Yes. We'd be delighted to try the experience.

Now in our swimwear, we join the rest of the group of guests who had just
started their Temazcal experience. Most people think a sauna is something
invented by the Scandinavians, and that the Turkish Bath is its Middle
Eastern equivalent. But when the Spaniards conquered the Americas they were amazed to find that the Aztecs also had their own version of a steam bath, which combined cleansing with healing and was called a Temazcal. This name is developed from an Aztec language, combining the word for bath - temaz - with the word for home - calli. Temazcalli was subsequently used to describe humidity, getting wet, or a place where water is born.

On joining the group I am introduced to the Indian Temazcalero, Francisco, who will perform the ceremony. A member of the Purepecha Tribe from Tarascan, his native name is Nahualyaolyollot. It was Francisco's medicine-man grandfather who taught him to perform his first Temazcal at the age of thirteen. Today Francisco is also an expert in several other rituals and traditions, such as 'The Sun Dance'. As we talk, he explains that the Temazcal is the place where medicine is born and where people can connect with the spirit of water, plants, air, earth and fire.

I learn that the Temazcal is built with clay bricks, piloncillo (raw cane
sugar) and medicinal herbs. The ritual is to last two and a half hours and
will consists of two or three segments. Francisco finishes his explanation
and picks up a giant conch seashell. The ceremony is about to begin.

First, Francisco blows a loud note on the conch, repeating this four more
times after turning around a little in each instance. I ask the reason for
this and am told that it is a salute to the five directions: North, South,
East, West and Earth. More ritual and prayers follow. A bundle of objects
including deer antlers are waved over the glowing embers and hot stones.
Feathers are shaken over the heads of the participants.

More prayers, and a large pottery container of brewed herbal water is brought out, each participant getting a small mug of this to drink. Francisco takes a large lump of pine resin mixed with herbs out of the ceremonial bag tied around his waist. Each person is given a small piece and Francisco keeps a larger one. After another prayer, the resin is offered to the fire, and he throws his piece into the glowing embers. It flares up, and we follow with our smaller offerings. We are then handed some twigs and branches of herbs that we take with us into the Temazcal. Once inside, each person takes a seat on the narrow inner-ledge that runs around the wall, and faces the empty circular pit that will soon be full of red-hot rocks.

I talk to Reto Kade, the young Swiss-born manager of Tamarindo's impressive spa complex. Reto has been living and studying Mexican Indian customs and beliefs for over a decade and is extremely knowledgeable in this area.

He explains that the Temazcal has two properties. It is a cleansing steam
bath where herbs and flowers are used for their therapeutic properties and
ability to perfume the steam, and most importantly, it has spiritual
significance that is believed to purify the mind, body and spirit and create
a union with nature, the universe and God.

The Temazcal bath, he says, usually takes place in a small domed adobe
structure which is usually in a peaceful garden setting to engender a calm
and tranquil frame of mind. The area is generally divided into a special
domed bath chamber centrally heated by rocks, and an open area for massage, meditation and rest to be used after the bath. The Temazcal needs to be kept small in order to concentrate the cleansing and healing steam. For this reason the roof is domed so there are no corners in which the steam can linger.

Now it is time to bring in the white-hot rocks. Each is clamped by two small deer antlers, lifted and placed, with a short incantation, in the stone pit located in the centre of the Temazcal structure. The door opening is then covered with deer hide or cloth, and in the darkness, herbal water from the pottery vessel, which has been brought inside, is then poured over the rocks creating clouds of steam. This is repeated for about 25 minutes, during which soft chants, spiritual and pre-Hispanic, add atmosphere to the
occasion.

The interesting distinction between the Temazcal and a European-style sauna is the steam. Instead of just using water, the indigenous Americans use a brew made up of warming or stimulating herbs designed to help with various conditions. Among the arsenal of plants used today might be rosemary, mugwort, and eucalyptus, along with mullein, or the leaf of the castor bean plant - though herbs vary from location to location. Camomile, sassafras, horehound, milfoil and local herbs called palo de brasi or toronjil can also be used.

The Aztecs were not the only people to enjoy the Temazcal. It was also an
important part of natural health practices among various indigenous peoples including the Zapotec, Mixtec, Mayans and other indigenous groups. These peoples have now largely been absorbed into an inter-married Mestizo group, but they have kept many of their traditional customs, and this kind of sauna is alive and well in Mexico and further south.

The herbal steam is designed to induce sweating to release the body's toxins. The indigenous practitioners refer to these toxins as excess 'hot' or 'cold' energies. The Chinese would refer to yin and yang. Natural health principles around the world would seem to be in harmony despite the differences in cultures and continents.

As the purification of the body progresses with successive sweating, the
Temazcalera, during some ceremonies, will gently beat the bather's body with herbs and brush steam around the head. This is to encourage deeper breathing and relaxation. Depending on the rate of sweating, a bather may be given a warm water bath to either cool the body quickly, or to encourage further sweating.

One of our group is feeling faint, and Reto passes a wet hand towel to wipe the face, then suggesting that the lady cup her hands and breathe through the herbs she is holding. It works and moments later she is fine.

Now the oxygen level in the small building has dropped to the point where the Temazcalero pulls back the door covering. Fresh, cool air enters the area where we are sitting, but soon new heated rocks are brought in, the door is again covered, and another 20 minutes of steam follow.

By now we are starting to feel surprisingly well. Our bodies are covered
with sweat, but there are absolutely no ill effects. We all agree that the
experience has been completely beneficial.

And then its over. The door covering is pulled back for the last time and we are given numerous cups of herbal water. Reto explains that it is essential that we do not dehydrate, and so we must drink - and drink - and drink.

A few minutes later we have cooled down sufficiently to exit the Temazcal.
Some - the bravest and youngest - from our group go down to the beach for a quick dip, and then quickly return to the platform where we will all relax. The rest of us are wrapped in blankets and lie on our backs looking at the darkening sky. It is dusk and the first stars are appearing. Half an hour of sky gazing, and the Temazcal ritual is complete. We feel surprisingly refreshed. It's time to go back to the hotel complex.

For women, the Temazcal has been used to great effect for female conditions such as pre-menstrual syndrome, infertility, pregnancy, childbirth and the traditional Aztec forty-day quarantine following childbirth. The Temazcal is also considered to be an aid to promote the flow of milk.

It is believed that the action of the Temazcal moves the hormone system
around. The herbs considered best revel in the names 'chapulistle', 'santa
maria' and 'pericon'. Bathing in the Temazcal is considered beneficial for
women to regulate almost any menstrual problem.

There is an instance of the Temazcal helping a woman overcome an ovarian cyst. Treatment in the herbal steam bath helped reduce the cyst to one fifth of its size. This treatment was supported by herbal treatments and
acupuncture.

The Temazcal has been found to be an ideal medium for birthing babies as the warmth within the bathhouse is not so drastically different from the uterine environment where the baby has been growing. This gentle birthing procedure has been part of Mexican lifestyle for centuries - an idea that has only caught on in the Northern Hemisphere in the last few decades.

But it is also extremely beneficial for men, and has the reputation of
healing many parts of the body that may have 'gone out of balance'. As for
myself, I have tried many types of saunas and similar treatments around the
world, enjoying most of them. But there is no doubt in my mind that the
shamanic cleansing of the body, mind and soul will always make the Temazcal one of my favourites.

We experienced the Temazcal in one of Mexico's finest boutique sea-and-golf resorts, Tamarindo, not far from Manzanillo on Mexico's Pacific Coast.

The Temazcal here takes place on Tuesdays and Saturdays at 4pm, with
reservations required. Cost per person is US$100. A wide range of other spa experiences are also available, along with some of the best golfing in
Mexico. For more details, check their website at:

and click on the 'Luxury Collection', then look for El Tamarindo Golf Resort in South American Section