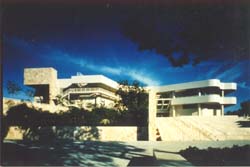 A t-shirt available in the Getty Center Bookstore reads, "The Getty Center/Finally Open" in simple white on black, like t-shirts you can buy with grammar school report card phrases such as, "plays well with others " or "runs with scissors." The comparison is a good one, intentional or not, as the Getty Center epitomizes both phrases. The 24-acre "campus" in the Santa Monica hills is at once playful and risky.

The Getty Trust seemingly took a big risk when they piled about a billion dollars into an arts-based destination in the heart of Los Angeles, a town long-chided for its lack of obvious culture. But, as any native Los Angleno will tell you, the refinement has always been here, it just takes a trained eye to find it. The Getty Center deserves every bit of praise for finding the enlightenment inherent in LA. The streets of LA are lined with banners announcing the opening of "Your Getty Center." The Getty Villa in Malibu had long been the secret passion of this native Southern Californian. But a new museum? One that would take longer than two hours to tour? In LA? Maybe I'd lived in San Francisco too long, but I thought the idea sketchy. That was until I realized that LA, my beloved LA, was going to make a show of it. 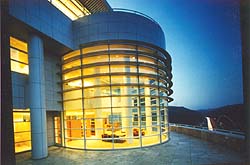 And, such a show! The pale, travertine stone walls of the buildings play so well against the voluminous, reflective windows I hardly wanted to walk inside. Truth is, whether you're inside or out, the amount of natural light is stunning. The grounds are beautiful, the site perfectly situated to allow visitors a 360-degree view of Los Angeles: from the deep blue Pacific in the west to the movie studios in the east. It may not be Hollywood, but you can still see the sign.

Once you have arrived at the Center (by car, foot, taxi, bus, or carpool) head first to the lower tram station. There's one track, two trams, and the trip takes about five minutes. If the line is long, or they aren't running shuttle busses, the walk up to the actual Center is not bad...about fifteen minutes. It is, however, about a mile and all up hill.

There are six major sections of the Getty Center, plus the Central Garden. The tram lets riders off just beyond the Harold M. Williams Auditorium where ArtWorks: Behind the Scenes at the Getty is screened daily. Lectures, performances, and programs are also held here. One recent Thursday, "Selected Shorts: a Celebration of the Short Story" featured actors reading contemporary and classic literature. Hollywood, meet art. Art, this is Hollywood.

Next to the Auditorium lies the North Building that houses the Getty Information Institute and Getty Trust Administration. The G.I.I. is described as a "much-needed bridge between humanities scholarship and information technology." Which is to say that the G.I.I. is to Picasso what Sally's Place is to Wolfgang Puck. 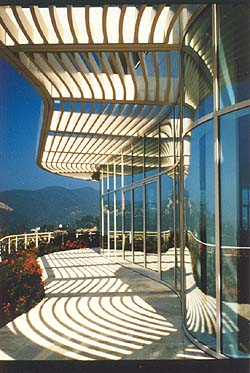 Clockwise from the North Building is the East Building. Here, the Getty Conservation Institute, Education Institute for the Arts, and Grant Program go about their business. And their business is to conserve, educate, and fund artists who may some day appear in the center of attention: the J. Paul Getty Museum. The museum itself is made up of five pavilions: North, East, South, West, and Exhibitions.

The art is arranged chronologically, starting in the North and ending in the West. Visitors can choose to walk through the galleries in order. Or, they can meander through the galleries and Museum Courtyard, following whims and urges. One suggestion: the West Pavilion houses art after 1800 (van Gogh's "Irises" and the modern photographs collection for example) and is by far the most popular building on the site. The line can be long: if it's past the handrail to the north of the building, expect to wait about 20 minutes. On a busy day (weekends, holidays, any day with good weather) go here early.

Each Pavilion is arranged so that the paintings are on the second floor; furniture, sculpture, decorative arts are on the first floor. This works well as the upper galleries are often lit by skylight, allowing the visitor a peek at the art the way it was intended to be seen: in natural light. Also, in each Pavilion there is an Educational Area where you can talk to a docent about the exhibitions, interact with Art Access (the multi-media computer stations), and learn more about the art in the adjoining galleries. There are usually a number of hands-on opportunities, including a close-up look at items used to add color to paint. (Think: flowers, stones like lapis lazuli, and real gold.)

The Exhibitions Pavilion is hosting "Beyond Beauty: Antiquities as Evidence" through January 1999. Here is where you will find all the Greek and Roman art that will ultimately reside in the Getty Villa in Malibu.

There are a number of amenities provided to make your visit both more enjoyable and more educational. In the Entrance Hall, just up from the Tram and Arrival Plaza, there is a coat check, the Getty Bookstore, the Orientation Theater, and the Audioguide Desk. The Audioguide is a self-guiding tour of the museum; rental is $2.00. Numerous publications are also available. Don't miss "If You Only Have an Hour" tours A and B if you don't have much time to visit the campus. 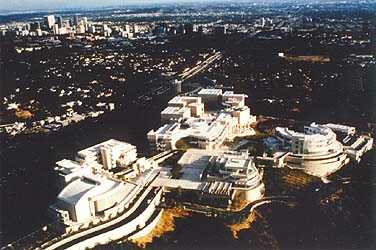 Almost as impressive as the Getty collection is the site itself: 110 acres set atop a hill in the Santa Monica mountains. From the Pavilions one can see the entire LA landscape: Pacific Ocean, rolling green hills, skyscrapers, and the 405 freeway. Planes jet to and from LAX. And, on the day we visited, no less than three blimps dotted the skies. There are balconies on each of the Pavilions so you can step outside for a breath of fresh air.

The Museum Courtyard, which sits between the Pavilions, has two water fountains, seating with and without umbrellas, and a beautiful view of the Central Garden. The Central Garden lies just west of the Pavilions, between the Museum and the Getty Research Institute. Designed by artist Robert Irwin, the Garden is a changing "work of art." A small stream runs from the north, and paths cut a switchback trail from the south towards a pool of flowers. While some portions of the Garden are clearly in their youth (giant, beauganvilla-filled pillars) other portions are meant to be young and temporary.

After all this looking and walking, a visitor works up a powerful hunger. Good thing the Getty has many places to grab a bite to eat. There are a number of Cafe Espresso carts located throughout the Center serving drinks and snacks. Pre-packaged, yet fresh and tasty, fare can be purchased at the Museum Cafe, a self-service cafeteria. Salads, sandwiches, and snacks can be yours here for $3 - $7. The Cafe shares an outdoor dining area with a Cafe Espresso and overlooks the Central Garden. Also cafeteria-style, but made to order, is the aptly named The Cafe. The Cafe (open 11 - 3 daily) is an indoor/outdoor restaurant serving pizzas, salads, grill items, sandwiches, and desserts. The Cafe is reasonably priced and our lunch for two rang it at a mere $18.50 -- a bargain when compared to the prices at most museums. For upscale dining, try The Restaurant where lunch, afternoon tea, and evening refreshments are served by a well-heeled waitstaff. Prices here range from $7 - $12/entree. Reservations are recommended at The Restaurant. There is also a picnic area next to the lower tram station. Groups of 15 or more are asked to call ahead for reservations.

The Center is open past sunset on Thursdays and Fridays. The view of the Pacific is so grand, and the grounds so beautiful, I plan on making a special, twilight trip to the Getty during the summer when the evenings are warmer.

Beautiful views, a better than world-class art collection, and a spot to rest and take it all in: this is the wondrous Getty Center. And, though reservations are hard to get, you won't be disappointed. Larger than life, intimate, beautiful: the Center is the new cultural heart of Los Angeles. Bravo!

The Getty Center is open Tuesdays and Wednesdays, 11 AM - 7 PM

To guarantee yourself admission to the Center, you must have a parking reservation. Call (310) 440-7300 for information. Count on at least a six-month wait.

Foot traffic is allowed entrance to the Getty Center (this is a change from the car, bus, or taxi-only policy at the Getty Villa in Malibu). Santa Monica MTA bus #561 and Santa Monica bus #14 both stop at the Center. There are a number of local shuttle services (your hotel should have the numbers). And, there is a taxi stop on level P-1 of the parking structure.

Admission is free, parking is $5.