What's New in Our Nation’s Capital 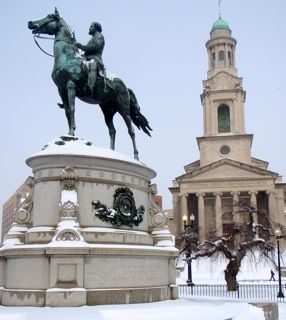 There’s a new energy in Washington, D.C. and only part of it is from the new Commander-in-Chief.  Old museums are new again and new ones are incorporating 21st century technologies in an effort to attract visitors.  Where to begin?  At the top.

Mr. President     A White House tour is a great way to introduce children to our nation’s capital and while you won’t see the occupant-in-chief, you will revel in the splendor of the official residence.  The self-guided tour is heavy on portraiture as a way to familiarize yourself with past events and Presidents and a walk-through of selected rooms (Blue Room, East Room) will elicit oohs and aahs.  By all means have your kids engage the Secret Service agents stationed about – they are happy to answer questions and even provide souvenirs as a parting gift.  Contact your Senator or Member of Congress to arrange a visit; it’s advisable to inquire several months in advance. 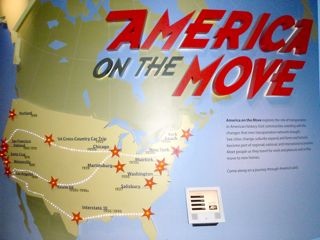 A Look Back     The National Museum of American History may be cheekily referred to as “America’s Attic” but, rest assured, this is the freshest attic in America.  Recently reopened after a nearly two-year makeover, the museum is filled with Americana yet possesses the kind of interactivity sure to engage today’s tech-savvy generation.  Begin with a walk down memory lane by having your kids ogle, among other things, an old Underwood typewriter, an early IBM time clock bigger than a kitchen cupboard and Carrie Bradshaw’s PowerBook from “Sex and the City.”  The “America on the Move” exhibit speaks to our collective love of trains, planes and automobiles and ends with a show-stopping movie, the aptly-titled “Cars on Film.”  Kids could spend hours in “Invention at Play,” where they can build this and tweak that much like Thomas Edison did while the adjacent “Sparky Lab” is more suited to science geeks.  Note to Mom:  leave Dad and the kids in the labs and make a bee-line for “The First Ladies of the Smithsonian,” easily the museum’s most popular exhibit and a showcase for the varied ornamentation of Presidential spouses.  The entire family reconvenes at “Thanks for the Memories,” where Dorothy’s ruby slippers and other American treasures remain in perpetual view.  americanhistory.si.edu/ 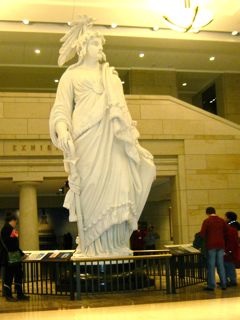 The history lesson continues at the new U.S. Capitol Visitor Center, a gleaming entrance to our hallowed halls of government.  The Center is accessed via the Capitol’s East Plaza (the side that faces away from the National Mall) so be prepared for a hike from most Smithsonian museums.  Sign up for the excellent Capitol tour, which begins with a 13-minute film and ends at Exhibition Hall, where you can view a plaster cast of Freedom, the bronze statue that tops the Capitol (and can be hard to see since it’s perched 288 feet above ground).  Large video screens provide a live feed from the House and Senate when in session but it’s the Congressional Quiz, available at user-friendly touch screens, that will captivate younger visitors.  visitthecapitol.gov  The mood is somewhat somber at Ford’s Theatre, where our 16th President, Abraham Lincoln, was shot nearly 150 years ago.  The beneficiary of an 18-month renovation, this working theater looks better than ever and all historical elements of the building have been preserved.  A one-act play, One Destiny, is offered as part of the regular daytime tour schedule and should not be missed; the new gift shop is one of the  best in the city.  Most touching, however, is the opportunity to gaze upon the box where Mr. and Mrs. Lincoln sat on the evening of April 14, 1865 as they watched a performance of “Our American Cousin.”  fordstheatre.org

Moving Into the 21st Century     At the National Museum of Crime & Punishment, centuries of good and evil are examined in thrilling multimedia detail.  Criminals are traced back to medieval times though it’s likely youngsters will be smitten with “Outlaws of the Wild West” and its nearby shooting range.  The pock-marked ‘34 Ford used in the film “Bonnie and Clyde” is on display alongside Tony Montana’s Uzi from “Scarface” and (thankfully) these artifacts lead to an exhibit titled “Case Closed!” on famously solved crimes.  Moving on to the crime-solving side of things, children are invited to scan their fingerprints and take home a copy (or three) then segue to a lie detector machine and an interactive maze where they may or may not make their jail house escape.  A tricked-out Harley police motorcycle beckons, if only for a pic, while the “Patrol Training” driving game is a can’t miss for both parents and kids.  The museum is filled with interactive stations that engage visitors, with the most effective being the Q&A wheels placed throughout by the National Center for Missing and Exploited Children, an initiative launched nearly thirty years ago by museum co-founder John Walsh of America’s Most Wanted fame.  crimemuseum.org 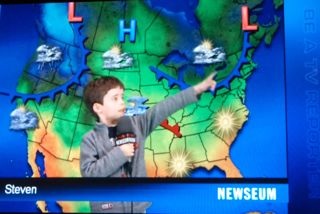 Newsworthy events are also chronicled at the Newseum, a museum “where the news comes to life.”  The multi-story steel and glass structure acts as a repository for newspapers, photographs, archival video and much more.  Begin your visit with a 4-D movie that spotlights Nellie Bly, Edward R. Murrow and other news hounds then head down to the concourse level for a bird’s eye view of eight three-ton chunks of the Berlin Wall (the accompanying multimedia exhibit is as newsy as the Wall is impact-full).  “The Funny Pages” is a retrospective of great comic strips yet kids will chuckle even more once they get their turn to “Be A TV Reporter” thanks to accommodating “stage hands” who’ll give your child numerous takes.  Some of the material and exhibits at the Newseum may not be suitable for younger children so it’s wise to review the visitors guide before entering the galleries.  That said, parents should take turns with the kids so that each can visit the Pulitzer Prize Photographs and 9/11 Gallery.  newseum.org

Where to Stay     The Hotel Helix is happy to provide your fifteen minutes of fame, seeing as how most everyone else in town has already achieved it!  The fun begins as you walk through a billowing gold curtain that opens on cue and extends to your room, a playful romp of color and form that is warmed up by the bed’s faux fur throw.  Families should sign up for a “Bunk” Room, where a separate bunk bed area easily sleeps three.  A brightly striped couch in the living area is the perfect spot for viewing the flat-screen swivel TV and if hunger strikes, a lime green mini bar is stocked with treats.  Animal print robes come in all sizes so kids get one, too, while the nightly “bubbly hour” pairs champagne and scintillating conversation.  And the party goes on:  the Helix Lounge’s Doggy Happy Hour on Wednesday nights has both bark and bite thanks to family-friendly eats and a canine visitor from the Washington Humane Society.  Star-struck yet?  1430 Rhode Island, N.W., (202) 462-7777; hotelhelix.com.  Rooms starting at $169; weekend rates from $125.  Internet packages and specially-themed promotions available.

Where to Eat     Take a leisurely stroll to Market Lunch, a popular eatery in the city’s Eastern Market just south of the Capitol where breakfast is the meal du jour.  The cafe’s “bluebuck” pancakes are legendary and help explain the line out the door.  225 7th Street, S.E., #11, (202) 547-8444; closed Mondays. 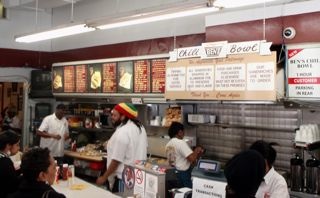 Over at Ben’s Chili Bowl, it was comedian Bill Cosby who helped put the chili on the map.  A U Street institution, Cosby has been a patron for forty years and even met his wife, Camille, here.  Everyone will love the hustle and bustle and kids will be more than satisfied with a chili cheese dog and fries.  1213 U Street, N.W., (202) 667-0909; benschilibowl.com.  As hot as its name, matchbox is a Penn Quarter bistro favored by in-the-know locals and known for its individual brick-oven pizzas.  The chicken pesto pizza is full of flavor while the fire & smoke is topped with jalapeno paste and smoked gouda and is, well, smokin’.  713 H Street, N.W., (202) 289-4441; matchboxdc.com.  Cool-y seductive is Jaleo, a Spanish tapas bar in Penn Quarter where celebrity chef Jose Andres has been reinventing Spanish cuisine for years.  Kids will love the salt cod fritters with a honey alioli and melt-in-your-mouth lobster croquettes.  The Tortilla Espanola, a classic egg and potato omelette that’s utterly soothing, pairs well with tender strips of filet set atop creamy mashed potatoes.  The sangria?  Excelente!  480 7th Street, N.W., (202) 628-7949; jaleo.com.

What else?     Disney on Ice continues to offer a slew of shows that prove mesmerizing to kids, among them A Disneyland Adventure, which sees the Incredibles paying a visit to Disneyland (as the Parr family, of course) only to find themselves fighting crime yet again.  From our young son:  “Mom, the Incredibles must’ve invested in some really good skating lessons!”  Performances scheduled in/around the D.C. area and across the U.S.  Visit disney.go.com/disneyonice/ for details and showtimes.

Elaine Sosa Labalme is a food and travel writer based in San Francisco, California. When she's not busy as a domestic goddess she's out traveling with husband Fen and seven-year-old son Steven. She hopes to be the next Charles Kuralt.