Visitors to London often think they've "done" England. Though experiencing a fascinating facet of this country, they return home without ever seeing the stately homes where the nation's artistocracy lived, loved and often labored to build an empire on which, at its apex, the sun never set. 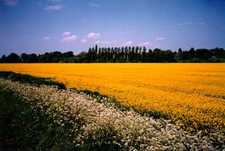 There's something special about the English countryside in Spring. Perhaps it is the gentle, rolling landscape or the muted softness of the panoramas. Or maybe it's the flowering fruit trees, the occasional poppy, the way the vividly-yellow mustard seed crops contrast with the verdant green of the other fields, hedgerows turning these into giant chessboards with contented cows acting as pawns and farmhouses as castles.

If there's any downside to travelling across this bucolic vista it is the way the British build their otherwise-delightful country roads. If you are from the New World, you will find their narrowness irritating. There is nowhere to pull over and get out to stretch your legs or stop to admire the view, and the bitumen often butts almost right up to fences and crops. I always admire British drivers for coping with such narrow roads without losing their tempers or for trying to pass other cars when it is dangerous to do so. Under such conditions, in America, Canada or Australia, hospitals would be overflowing with casualties from among the impatient-turned-patient.

The British aristocracy, though they nearly all kept apartments in London suburbs like Mayfair for their visits to The City, mostly made their homes among all this lovely picture-book countryside. A handful of these mansions have been turned into splendid boutique country-hotels, and as we approached the first of these, we became quite excited at the thought. What would it be like? Would it be as grand as we had anticipated? We were not to be disappointed.