An hour's drive from Piccadilly Circus and only 35 minutes from London Heathrow airport we reached the Hampshire-Berkshire border to arrive at Tylney Hall, our first Stately Home destination on this wonderful trip. Set in Jane Austen country, it, and the surrounding area, was straight out of Emma, Pride and Prejudice, and Sense and Sensibility. All around Tylney Hall one finds the areas referred to in these novels and staying here made it easy to half-close one's eyes and imagine life in the times of those books.

Although records show that a mansion house had been built on this property in 1561, Frederick Tylney's gravestone inscription dates the first Tylney Hall as being constructed in the year 1700. The last male Tylney died in 1725 when the property passed to his daughter who married the Viscount Castlemaine, later to become the Earl of Tylney. Subsequent owners were the Earl of Mornington, and Sir Lionel Phillips who almost completely rebuilt Tylney Hall in l985 and incorporated the Great Hall. Partially panelled in Italian walnut, its ceiling was brought in sections from the Grimation Palace in Florence. 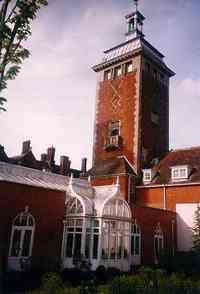 The building had a varied history in the early l900's, serving as a hospital during WWI and as headquarters for the Clan Shipping Line during WWII. It was then made into a school which closed in l984 when the building was totally refurbished, redecorated and turned into the fine country-house hotel which it is today. Fortunately, the magnificant ceilings, Italian fireplaces and superb lounges have all remained and have been supplemented by indoor and outdoor swimming pools, the Oak Room restaurant and much, much more.

The 66 acre property features wonderful tennis courts, archery, horseriding, splendid gardens and wooded trails. The adjacent 18-hole golf course means that golfers do not have to travel any distance to enjoy a top-notch game. Rooms are traditional and very British, with the sort of decor you find in the English edition of House and Garden. No wonder it rates so highly on the Egon Ronay and RAC/AAA registers.

Dining here was also a marvelous surprise. Until relatively recently, country dining in Britain was a matter of luck. Only too often you would get a steak that made up in strength and resilience what it lacked in taste or soup tasting of flour and not much else. But this has changed dramatically, and our dinner at Tylney Hall was an example of just how delightful dining in Britain can now be (if you pick the right places). 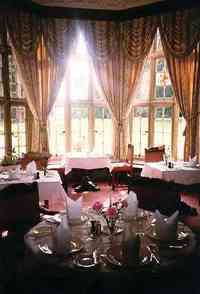 The dining room, as is the case with most historic-mansions-turned-into-hotels, was a large add-on conservatory-style room part of which was in the original part of the house and featured century-old carved-wood-panelled walls and a large fireplace. The extension of this room was relatively new, with a dramatic domed glass ceiling draped with white voile and three sides of glass-panelled windows that looked out on to the floodlit garden and pool. Fresh flowers and candles and white tablecloths contrasted with the dusty-rose carpets and chairs.

The live piano music that accompanied the meal was soft and romantic, the service excellent, and the cuisine -- like Entree of Scallops with Ratatouile served between two wafers of grilled eggplant -- was sensational, with the strong, distinct flavor of the vegetables and eggplant counter-balancing the soft and tender scallops. 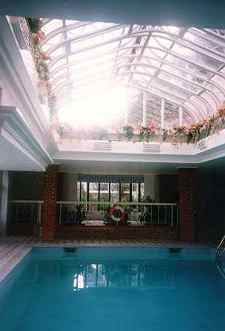 Tylney Hall proved to be an absolute delight and is ideal for those that prefer to spend their holidays as stay-puts, never leaving the property's grounds. Even then, such guests have access to a heated outdoor swimming pool, indoor pool with whirlpool and sauna, a state-of-the-art gym, snooker rooms, tennis, croquet, golf, horse-riding, archery and clay-shooting. We found that strolling the extensively landscaped gardens and nearby woods to be just our ticket, and were also greatly tempted to go hot-air ballooning nearby.

But Tylney Hall is also in the very heart of the action when it comes to exploring further afield. From here one can visit Stratfield Saye House, the former home of the Duke of Wellington, Basing House once the greatest House in Tudor England or Highclere Castle, the ancestral home of the present Lord Carnarvon, whose grandfather financed the archaeologist Carter in his l920's expedition that discovered the tomb of King Tutankhamoun in Egypt.

There is far more to see and do than I can describe here but we chose to visit the British National Motor Museum at Beaulieu, which we found to be outstanding. Britain was, for a long time, in the forefront of motor-car production, amazingly, an industry developed by many of the country's bicycle manufacturers. British cars were world leaders and the Motor Museum graphically tells this story through the many historic vehicles on display.